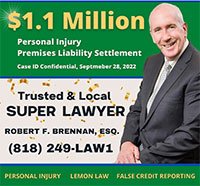 What you should do if you suspect you may have bought or leased a lemon.

Although I am not a litigious person I found myself in a position where I found the need for an attorney to right a wrong. I had met with several lawyers in the process, and although they were likable as individuals, none left me with a feeling of confidence or that I would be in the best hands. That is until I met Robert Brennan. I was immediately struck with his professionalism and honest assessment of what lie ahead – no fluff, just fact. Moreover, I was struck with his accomplishments and background that I subsequently researched. So began a very long journey in an effort to gain a little justice. Through out the eight and one-half year process Bob, as I came to know him, never wavered and continued to plug away at the case that the opposition continually tried to block, thwart and stall. Through all of this he retained a conservative optimism, as is proper for his profession. When the day finally came that we were at trial I realized that I indeed had made the correct decision in choosing Bob. He is a VERY quick witted and skilled litigator that knows his business. He was able to counter every less that honorable move by the defense, while all the while maintaining an affable or friendly demeanor that won over the jury and seemingly the judge in the case. It was a real life experience of watching a more personable version of Perry Mason at work. We won the case and the subsequent appeal that has been life changing for me.

Simply speaking, elder financial abuse involves taking advantage of an older person for financial gain. It is estimated that older adults lose more than $36 billion every year to scam, fraud, and exploitation that is all too often carried out by family, friends, or other trusted individuals. LEARN MORE

In California, general business law deals with the set of state laws that deal with the regulation of businesses. Commercial litigation involves practically every type of dispute that can arise in the business setting, such as breach of contract cases, class action lawsuits, partnership/joint venture disputes, and more. LEARN MORE